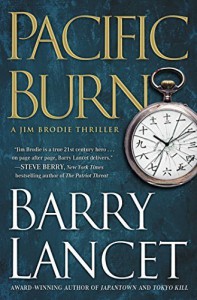 About this author
Barry Lancet's JAPANTOWN, an international thriller/mystery, won the prestigious Barry Award for BEST FIRST MYSTERY NOVEL, and was selected by both Suspense Magazine and renowned mystery critic Oline Cogdill as one of the BEST DEBUTS OF THE YEAR. His second book, TOKYO KILL, is a finalist for a Shamus Award for BEST NOVEL. The third entry in the Jim Brodie series is PACIFIC BURN, due February 2016.

Lancet moved from California to Tokyo in his twenties, where he has lived for more than two decades. Lancet spent twenty-five years working for one of the country’s largest publishers, developing books on dozens of Japanese subjects from art to Zen—all in English and all distributed in the United States, Europe, and the rest of the world.
His unique position gave him access to many inner circles in cultural, business, and traditional fields most outsiders are never granted. Early in his tenure in the Japanese capital, he was hauled in by the police for a non-criminal infraction and interrogated for three hours, one of the most heated psychological encounters he had faced in Japan to that point. The run-in fascinated him and sparked the idea for a thriller based on his growing number of unusual experiences in Japan. He is now at work on his next book featuring Jim Brodie

In the third book in “what will likely be a long and successful series” (San Francisco Magazine), Japanese antiques dealer and PI Jim Brodie goes up against the CIA, FBI, Department of Homeland Security—and a killer operating on both sides of the Pacific.

In recognition for his role in solving the Japantown murders in San Francisco, antiques dealer and sometime-PI Jim Brodie has just been brought on as the liaison for the mayor’s new Pacific Rim Friendship Program. Brodie in turn recruits his friend, the renowned Japanese artist Ken Nobuki, and after a promising meeting with city officials and a picture-perfect photo op, Brodie and Nobuki leave City Hall for a waiting limo.

But as soon as they exit the building, a sniper attacks them from the roof of the Asian Art Museum. Quick thinking allows Brodie to escape, but Nobuki ends up hospitalized and in a coma. Brodie soon realizes that, with the suspicious and untimely death of Nobuki’s oldest son a week earlier in Napa Valley, someone may be targeting his friend’s family—and killing them off one by one.

Suspects are nearly too numerous to name—and could be in the United States or anywhere along the Pacific Rim. The quest for answers takes Brodie from his beloved San Francisco to Washington, DC, in a confrontation with the DHS, the CIA, and the FBI; then on to Tokyo, Kyoto, and beyond, in search of what his Japanese sources tell him is a legendary killer in both senses of the word—said to be more rumor than real, but deadlier than anything else they’ve ever encountered if the whispers are true.

what I thought of the main character: Jim Brodie
what can I say but I loved him, loved how as I started to read Pacific Burn that Jim Brodie reminded me so much of my two all time favorite black and white Detective Mystery films Charlie Chan and Mr.Wong, just like them the main character Jim Brodie did back down at all , and no matter how hard it seems he gets the job done.

what did I think of the book cover: I loved it, love how it show like a clock with the Japanese numerals on it. which makes it so cool, and so different.

what did I think of the story:
first off I want to say that even though this is book three in the Jim Brodie series this is the first time I've ever picked anything up by Barry Lancet and I'm now kicking myself because I haven't picked up this series by now. I loved it , loved how from the ever start it just pulled me in the pages, and once that started I could stop reading , had to know what happened next, had to find out all the Secrets and Lies that was been told and kept, who was trying to kill Jim and his friends, loved how Mr. Lancet mixed in the some of the history of Japan, that I didn't even know, it made every thing more real some how.Can't wait for it to come out to buy so I can pick it up and the first 2 books to this series. With that said I would love to say thinks to Barry Lancet, Elizabeth Breeden as well as to Simion & Schunster for send me an advance uncorrected proof  copy of this wonderful book for my honest opinion of it , as well as say thinks to Mary( Marybear)  the founder The Life of a Book Addict for also letting me have a change at reading this wonderful book to, because with out them I might still not have picked it up, if you love Mystery, Thriller & Suspense, non stop action, then you have to pick it up , because its all of that and more , not once did it let me down at all it delivered everything I love in a really great Mystery, Thriller & Suspensenovel. five stars all the way.